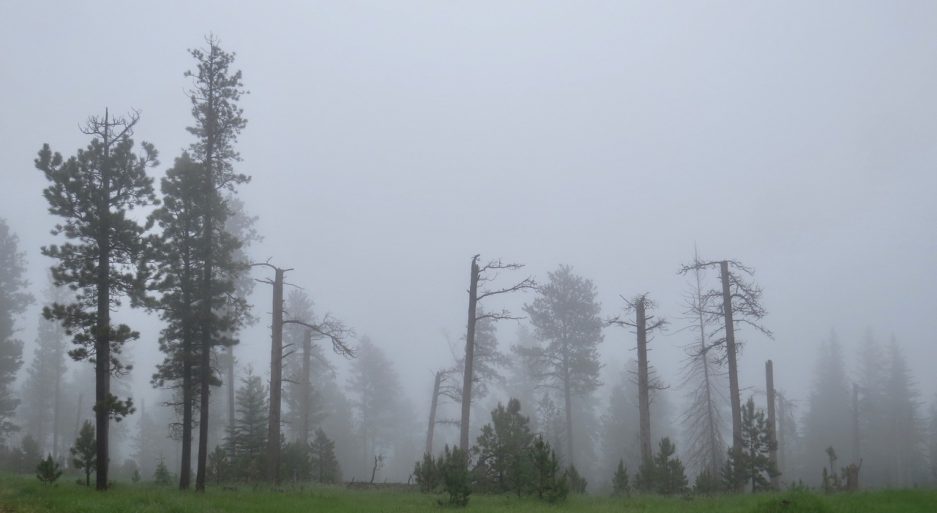 As explained in a Terence E. Hanley posting on Bierce, Bierce’s influence on H. P. Lovecraft seems to be by way of Robert W. Chambers’ The King in Yellow.

Specifically, two Bierce stories are explicitly referenced to in the Chambers book: “An Inhabitant of Carcosa” and “Haita the Shepard”.

Both these stories deviate from Bierce’s usual style described, in Lovecraft’s Supernatural Horror in Literature, as “obviously mechanical, and marred by a jaunty and commonplacely artificial style derived from journalistic models”. E. F. Bleiler, in his introduction to Ghost and Horror Stories of Ambrose Bierce, says there is some merit in the description of Bierce’s stories as “too contrived, mechanical and artificial to be effective” though he does think they have other merits.

Being more removed from the journalism of the 19th century than Lovecraft, I can’t comment on the standard journalistic matters of the time. I would say that most of Bierce’s horror stories are journalistic in the sense that they specify dates and locations. What Lovecraft calls jaunty and artificial seems to me more Bierce’s wit and cynicism requiring sentences that only seem jaunty on the surface but snag the reader with irony. Bierce is not an anodyne author one reads quickly.

Journalistic specificity is not the case with the two stories that Chambers used. Both are set in vague times and place.

“An Inhabitant of Carcosa” (with Spoilers)

This is a post-death story though no attempt is made to surprise the reader that the narrator is dead. The story opens with an epigraph from Hali, a religious figure, about the “divers sorts of death”. The narrator finds himself on a chill plain far from his familiar home of “the ancient and famous city of Carcosa”.

There are no other humans, no rising smoke, “no watchdog’s bark” (which Bierce would have liked since his daughter claimed he shot dogs on sight), and no cattle. The narrator is not an American or even Christian given his reference to ‘wives”. Finally, he meets a man of unkempt hair, equipped with only a bow and arrow and torch. He does not answer the narrator’s plea to point him to the direction of Carcosa. Instead, he breaks into a “barbarous chant in an unknown tongue”.

At story’s end, with the wolves howling, he comes across “irregular mounds and tumuli filling a half of my desert prospect”. It is all that is left of Carcosa.

The tale is said to be conveyed to the medium Bayrolles by one Hoseib Alar Robardin.

“Haita the Shepherd” (with Spoilers)

This is not a story of survival after death but a philosophical story about the dangers of always seeking knowledge and contentment, contentment, says the cynical Bierce, that will, at best, be very temporary.

The name of the beautiful woman Haita wants to spend time with is Happiness.  Yet, he drives her away with curiosity and doubt and misgiving. Yet Haita is cynically told at the end that, were it but for his faults, he could have had happiness for two moments and not just one.

[October 12, 2016 update: There is an echo of the Genesis story of Abraham bargaining with God over the fate of Sodom and Gomorrah. Haita bargains with Hastur over the fate of “the cities which he had been told lay in the plain”. “Cities of the plain”, in Genesis, includes Sodom and Gomorrah. While Abraham makes an argument about making the innocent suffer with the guilty, Haita refuses to worship Hastur if the cities aren’t spared.

The woman Happiness seems an embodiment of a particular ideal of happiness — the Stoic ideal which emphasizes duty and not worrying about the length of your life. When Haita fails in either count, Happiness the woman departs or becomes less beautiful.]

Lovecraft was certainly capable of philosophical tales but not, generally, on the nature of happiness or male-female relations.

S. T. Joshi says in H. P. Lovecraft: A Life, that Lovecraft was introduced to Bierce in 1919, certainly prior to his major writings. I agree with Hanley that the influence of Bierce on Lovecraft was not very strong.

Apart from the proper nouns Lovecraft borrowed from Bierce by way of Chambers, I think there may be a slim possibility that Bierce influenced Lovecraft in one other way. Lovecraft’s first mention of his famous fake book, the Necronomicon, was in 1922’s “The Hound”. Many have suggested Chambers’ mythical book, the eponymous The King in Yellow, as an inspiration.

However, Joshi seems to think that Lovecraft first read the Chambers book around 1927 in preparation for his Supernatural Horror in Literature. There is a fake book that Bierce created, Denneker’s Meditations, that Lovecraft may have encountered before The King in Yellow.

The book shows up in two Bierce works: “A Psychological Shipwreck” from 1879 and “Staley Flemings Hallucination” from 1906. Both were reprinted in Bierce’s book of weird stories, Can Such Things Be?.

Unlike Lovecraft’s use of the Necronomicon, Bierce doesn’t use the book as a source of opening epigrams. He drags it out in paragraph long quotes to explain key moments in his plots.

In “Staley Fleming’s Hallucination” it’s to provide a metaphysical exploration for a Bierce tale — not the sole one by any means — of lethal “animals” of mysterious origins or characteristics.

In “A Psychological Shipwreck”, the book is used to bring two souls separated in space and time together.

I’ve found no commentary on this matter one way or another. However, M. J. Penny has suggested the name of “Denneker” may be derived from woodcut engraver Jobst de Kekker.

Previous Installments in This Series

More Bierce related material is indexed at the Bierce page.