Posting this retro review will be one of the few productive things I did today. 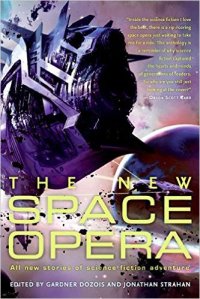 What is “space opera”? The introduction succinctly and accurately calls it romantic adventure science fiction told on a grand scale. It then traces the history of the sub-genre from its stirrings in the 1890s to its full-fledged birth in the 1920s to its nadir in the 1960s and 1970s, when the New Wave made it unfashionable, to its rebirth, while American authors were developing cyberpunk, at the hands of the British in the 1980s and 1990s.

For that grand scale, I’d specify vast scales of time and space and weaponry. The fate of species – their lives or at least their sanity and cultural viability – should be at stake and not some mere individual’s happiness or survival. Some of the stories in this collection are good but not space opera. Some are both. But there aren’t enough good stories of any type to give this collection a higher rating. [I gave it three stars at Amazon.]

The following stories fall in the unsuccessful and not even space opera category. The setup for Gwyneth Jones “Saving Timaat”, the narrator helping in the negotiations between representatives of two warring groups, the one cannibalistic predators on the other, is good, but the emotional connection of the narrator to the cannibal chief and her motivations are too oblique. James Patrick Kelly’s “Dividing the Sustain” is a would-be comedy of manners about a courier aboard a ship of communist colonists and the steps he takes to get close to the captain’s estranged wife, subject of an unaccountable infatuation, and to avoid getting “stale”, a consequence of longevity treatments. Not at all interesting.

Nancy Kress has put out some wonderful work, particularly when she engages in speculating about the consequences of biotech. However, her “Art of War” seems just a writerly exercise in developing the title phrase into a story and playing around with the cliché of stern military father (here a stern military mom) and a disappointing son. The story’s war between alien Teli and humans and the place each species’ art plays in the struggle just didn’t have the grand feel of space opera.

In the good but not space opera category are several works. Paul J. McAuley’s “Winning Peace” has the flavor if not the plot of Sergio Leone’s movie The Good, the Bad and the Ugly or a film noir. Its protagonist, sold into slavery after being taken prisoner in humanity’s civil war, is offered freedom in exchange for aiding in the quest for an alien artifact. He, however, has other plans – as do all the human and alien principals in this story.

Mary’s Rosenblum’s “Splinters of Glass” is a chase story initiated when the protagonist’s old girlfriend, from whom he’s been hiding, shows up with assassins in tow. He and the woman head out into the fissures of an ice world. Walter Jon Williams’ “Sends Them Flowers” has an interesting background – alternate universes differentiated not by divergences from some historical point but slightly different physical laws – and a couple of interesting characters tramping about in their inherited spaceship. However, the problems of the duo, most of them caused by the womanizing of the ex-con, don’t have the grandiosity required by space opera.

In the not very engaging but still space opera category are several stories. Kage Baker’s “Maelstrom” gets in here solely because its Martian setting, with a group of misfits trying, in an unsuccessfully humorous plot, to stage Edgar Poe’s “Descent into the Maelstrom” evokes the spirit of the American West, one of the spiritual ancestors of the space opera.

Gregory Benford’s “The Worm Turns”, sequel to his “A Worm in the Well”, has lots of hard science with a cometary prospector and her artificial intelligence heading through a wormhole. But I found the story — even with its encounters with aliens on the other side of the wormhole (they’re not at all happy about seeing humans), the resulting conversations between the aliens and AI, and the banter between machine and prospector — uninvolving.

Robert Reed’s “Hatch” has a promising set up: survivors of the Polypond War live on the outside of the Great Ship (setting for several Reed stories) and scavenge materials castoff by the cloud-like biomech Polypond. However, the ending is too obscure and wrecks an interesting story.

Tony Daniel’s “The Valley of the Gardens” has a key ingredient of space opera: a vast war between aliens from another universe and humans, a war humans are loosing, And the plot, alternating between the unexpected human victory in that war and its consequences on a young man’s world, was intriguing. The payoff, though, seems another writerly exercise in contrived symmetry between the two halves of the story, and the relation between a soldier and his weapon a badly literalized metaphor.

Another story marred by a too neat plot contrivance is Ian McDonald’s “Verthandi’s Ring”. However, it’s not marred enough to keep it out of the good and space opera category. Like some of the best stories in this collection, it brings the red-in-tooth-and-claw Darwinian struggle for existence into the ecosystem of the whole universe. When two species with superscience compete, there can be no peaceful co-existence because each wants and needs all the material and energy resources of the universe. Here it is not a simple version of humanity struggling with the aliens but the many clades man has evolved into.

Alien mathematical archaeology and how advanced cultures find the will to survive – as well as an opening of diamond hard science fiction describing an unusual alien probe – are in Greg Egan’s excellent “Glory”. Peter F. Hamilton’s “Blessed by an Angel” is set in the universe of his Commonwealth. It shows that civil wars may be fought over how to control humanity’s impulse to go into the box and embrace a life of lotus-eating in virtual reality. Here the conflict is not overt, doesn’t involve fleets of ships, is fought with subversion and espionage but the stakes are still for the race’s future.

Ken MacLeod is a socialist whose fiction is loved by libertarians. Here he brings his wry, cynical take on the futility of all political systems and combines it with evolutionary design strategy to show how the unfortunate inhabitants of Wolf 359 are part of an experiment to solve some old political problems. The title asks “Who’s Afraid of Wolf 359?” It turns out that a lot of people should be.

Alastair Reynold’s “Minla’s Flowers”, part of his Husker sequence and direct prequel to “Merlin’s Gun”, has Merlin stumbling across a human world threatened with extinction, in 70 years, by a breakdown of the alien Waynet transportation network. In and out of stasis as he tries to help them develop the tech to migrate offworld, he watches a little girl develop into an unpleasant, Stalinesque leader.

Stephen Baxter was one of the British revivers of space opera. His Xeelee story “Remembrance” features man’s first encounter with alien invaders and the resulting bitter conflict, for which Baxter pulls out three nifty bits of diverse and credible science, teaches the hard lesson that peaceful co-existence between man and alien is a doomed and foolish notion.

The redoubtable Robert Silverberg has a human woman from the backwater of an alien empire confront the Emperor and, reminiscent of Scherezade in the Arabian Nights, use her wiles to effect her purposes. “The Emperor and the Maula” doesn’t really have the science and technology of new space opera, but it’s definitely still space opera. One of the longest stories in the book, it’s enthralling all the time.

Also long and enthralling is Dan Simmon’s “Muse of Fire”. In a world of god-like aliens where humans are merely slaves, a troupe of Shakespearean actors is compelled to put on performances for their masters with the fate of humanity hanging in the balance. It manages to touch on the effects of art in a harsh world without engaging in easy pieties about art’s power and benefits.