While I continue to be a sluggard, the alternate history series continues.

I’m a great admirer of Stapleford’s critical and historical work on science fiction, but I’ve read few of his novels. (I’ve probably read more of his translation work than his novels.)

I’ve liked all the fiction I’ve read by him. I’d tell you that someday I hope to do a series about his works. However, I don’t need to. Phil Stephensen-Payne has already done it with the Brian Stableford website. 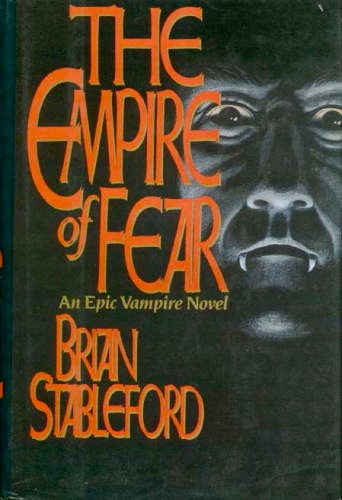 This vampire novel has little visceral horror and fear in it despite the presence of those “children of the night”. Rather it’s an interesting scientific rationale for vampirism — here the result of alien DNA brought to Earth in a meteor. The alien DNA attaches itself it to the Y chromosome and infects women in sexual intercourse and men in anal intercourse — much like AIDS — or by infected semen coming into contact with blood. There the new vampire becomes changed: the skin changes its color, the hair changes color, the new vampire becomes resistant to most diseases, capable of healing quite serious wounds, very long lived, and needful of daily amounts of blood to replace enzymes whose productions is inhibited by the alien DNA.

The novel is also dedicated to exploring the psychological and spiritual implications of immortality on humans. The turning point of this history is Attila the Hun’s ancestors coming on to the secret of vampirism while exploring Africa, taking it back to Europe and setting up a dynasty (that includes Charlemagne and Richard the Lion-Hearted, and Vlad the Impaler) that preserves the Western Roman Empire. What the European vampires represent is a sort of ancien regime, the forces of superstition. Stableford has the vampires coming up with a very authentic sounding religious rationale for their place as rulers. The Catholic Church says they are better suited for rulership having the wisdom of long life while that long life keeps them further removed from the blessed reunion with God that death brings than the common man. Puppet popes preach this doctrine while heretics insist that the sodomy rites of vampire creation point to their origins in the devil.
The vampires politically suppress emerging democracies. The vampires’ removal from the common estate of death and pain that their “unfinished” subjects render them very cruel. Stasis and ignorance abound with science pushed forward by commoners and vampires distrusting science for fear it might — as it does eventually – make nearly all humans vampires. The rigidity of the immortal is most shown in the African society of Adamawara where the oldest vampires are — and where the alien DNA first reached Earth. But rulers like Richard and his vampire knights get fatally caught up in ways of life and war that become outmoded. In short, vampires become much more prone to future shock than commoners. Some, though, like the utterly cruel, unromantic, realistic Vlad the Impaler — symbol of all that is cruel and oppressive in the vampire rule — take to new ways of war. Richard, not so cruel, caught up in chivalry, is less willing to rule by terror and bribe than Vlad and leave England when it is clear he no longer rules by consent.

The central tragedy is that Noell Cordery, the scientist who brings vampirism into the reach of nearly all men, is immune to the transforming process. He can not take part in the blessing he gives others. Like Moses, he can lead people to the promised land, here freedom from pain and death, but can not enter himself. Stableford puts his biology training to good use in the science and his sociology training to good use in developing and explaining what vampires would mean to humans as the novel takes us up to a 1983 world where nearly all men become vampires. As Cordery says, we all — vampires and commoners — live in the “shadow of eternity”, heirs to the past actions of others, influences to futures of others.

This is the lesson the tragically doomed boy (he has Cordery’s condition of being unable to be vampirically transformed and will die young of cancer) must learn. He is taught this by Leilah, Noel Cordery’s old lover and now a vampire. Their doomed, poignant relationship was a nice part of the novel, and Stableford does interesting things with the sexual and personal relationships between the beautiful vampires and commoners. Both must learn the value of finding their own way in life, growing (unlike the vampires of Africa), and remembering the warmth and pain of their humanity (which Leilah does unlike the crazy vampire woman Berenike in Africa to whom life has become a series of twitches designed to satisfy sexual urges). Other things I especially liked: the presence of the Hospitallers and the siege of Malta, the vicious presence of Vlad the Impaler, the African Ntikima, the religious element, and the unsure character of Noell Corderery (who, like all of us, must learn a faith in self). An unusual combination of elements in this novel, not what I expected, but I liked it.