Purely by accident, I seem to be caught in the 1920s for the next few reviews.

I’m still working on my review of Brian Stableford’s Scientific Romance (with 1914 being the most recent story in the anthology), but that’s going to take a while to make notes and write up.

By I already know what I’m going to say for some books I’ve finished since then.

So, today, we go to the island of Fiume in 1920 and the short-lived Regency of Carnaro, the so-called Pirate Utopia.

I’d heard of that short-lived “country” before on the Roads to the Great War blog. It was the brainchild of Gabriele D’Annunzio, poet, playwright, fighter pilot, war hero, and inventor, in the Regency, of a lot of the symbols later used by the Italian Fascists.

When I again pick up work on my World War One in Fantastic Fiction series, I’ll look more closely at the novella’s elements related to the war, but most of the story takes place post-war. The Regency of Carnaro is one of those European convulsions in the period between the world wars most Americans, including me, are ignorant of since we tend to think only of the Spanish Civil War in that regard.

I’ll probably also read Michael A. Ledeen’s D’Annunzio: The First Duce to see how closely D’Annunzio’s ideas matched Fascism. My sense is not all that closely apart from the political stagecraft Mussolini picked up from D’Annunzio. D’Annunzio seems, at least in this story, way too obsessed with a vision of a new world to be a true fascist. Paul Gottfried’s Fascism: The Career of a Concept only mentions D’Annunzio once.

Speculiction ways in with a more detailed review. 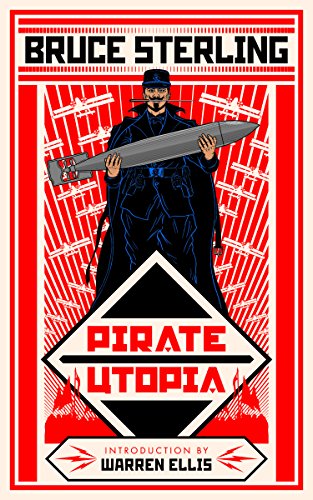 On September 12, 1919, acclaimed Italian war hero and poet Gabriele D’Annunzio stormed the city of Fiume, in what is now with Croatia, with 2,600 veterans of the Italian Army. He was angry that the Treaty of Versailles did not acknowledge Italian claims to the city. Thus the pirate utopia of scavenging weapons depots, more traditional piracy, extortion, free love, syndicalism, women’s suffrage, and casual drug use was born. To say nothing of the daily poetry readings D’Annunzio gave from a balcony, nightly fireworks, and uniforms that inspired many a European political extremist to come. It was a country where music was declared the fundamental principle of the state.

In our world, the fun ended on December 24, 1920 when the Italian navy bombarded D’Annunzio’s palace and declared the existence of the Republic of Fiume, an event known in fascist circles as the “Christmas of Blood”.

Sterling’s book is an alternate history of a sort and a work of “dieselpunk”. The departure from our timeline is the poisoning of Woodrow Wilson at the Paris Peace Conference. And, while it doesn’t really play into the onstage drama, Hitler fatally catches a bullet during a “beer-hall brawl”.

The trouble is, it’s not really a very plausible alternate history. H. P. Lovecraft and Robert E. Howard are strangely working with the U.S. Secret Service, with Harry Houdini as their boss no less. Yes, Sterling certainly knows his Lovecraft and what an Anglophile he was, and his slangy talk here is certainly something that Lovecraft could do on occasion with his friends. And Lovecraft did have a business relationship with Houdini, but it started in 1923. And Lovecraft was an admirer of fascism and Mussolini though D’Annunzio’s ideas, specifically his love of Futurism, don’t seem very fascistic.

This is more of an emotional alternate history than you would get from Howard Waldrop, and it’s just as detailed. As you would expect from Sterling, he loves the hardware of the Italian armored cars (that would be “a standard Lancia-Ansaldo IZM”) and guns and fashions.

And it’s not very successful fiction. Sterling’s pirate utopia is populated by several historical figures and taps into the zeitgeist of pseudoscience, spiritualism, parapsychology, occultism, and rapidly advancing technology that makes the 1920s so interesting. The pirate utopia draws plenty of anarchists and revolutionaries and smugglers and money launderers. Oh yes, there’s plenty of color here.

Most of the story is told from the point of view of Lorenzo Secondari, a former artilleryman and engineer who dreams of the Pirate Utopia manufacturing flying torpedoes (enabled by our old friend Giulio Ulivi of death ray fame). Secondari shares D’Annunzio’s dream of a Futurist world run by supermen like themselves, men of destiny who will sweep aside the bourgeois who stand in their way of creating “a world fit for heroes”. Fiume is to build weapons to terrify the world.

I suppose the Futurism is there to partially amuse in its naiveté and obscureness and, in the light of the history of the twentieth century, irony. But artists spouting manifestos as to how their art will change the world (rather like the younger Sterling in his manifestos proclaiming how cyberpunk would save science fiction) don’t interest me or convince me. Art can change the world, but it seldom does so when trying.

But the larger problem is that the element of occult and mysticism undercuts Sterling’s realistic narrative even more than his improbable alternate history. That mythic feel is quite deliberate with most of the characters referred to, in the opening cast of characters, as things like “The Prophet” (D’Annunzio) and the Pirate Engineer (Secondari).

And Sterling hacks off the end of his story just when things get interesting. Mussolini seems to perhaps be out of commission for good, and the U.S., in the persons of Houdini, Howard, and Lovecraft, comes up with an intriguing proposition.

In fact, the whole thing has a bit of the air of a modernist poem, say T. S. Eliot’s “The Waste Land”, sans footnotes. (Yes, I know Eliot’s poem didn’t originally have footnotes, but the fact that an editor thought it needed them does not speak in its favor.) Conclusions and allusions are not obvious in Sterling’s story (perhaps he was depending on Wikipedia erudition supplied by the readers).

Now, these problems are all solved in the Tachyon package which supplements Sterling’s story. In effect, it supplies meaning and context for Sterling’s truncated story.

For instance, in an included interview with Rick Klaw, Sterling provides the story’s theme: “… the brotherly feeling between certain kinds of political ecstatic cult politics and the ‘sense of wonder’ of reality-bending science fiction”.

Christopher Brown’s concluding essay, “To the Fiume Station”, puts the Republic of Carnaro in the context of “Sterling’s recent observations about the ways network culture liberates the timeline of our minds from the constraints of historiographically sanctioned narratives”. In particular, he mentions Sterling’s thematically similar Islands in the Net. However, the older Sterling seems wiser and more restrained in the possibilities of these semi-utopian schemes and about the wisdom of technological engineers managing our political affairs. Though, to judge by the attention we pay Zuckerberg, Gates, and Musk and have brought engineering terms like “hack” into politics, evidently we are a long way from shunning the technocratic state by and for technocrats.

Graphic novelist Warren Ellis’s introduction sets things up with a good introduction about “old gunsmoke, exterminating art and war dreams within which” Sterling presents his story.

Illustrator John Coulthart provides some quite nice illustrations throughout the book inspired by Futurism and D’Annunzio’s symbols.

In short, as a self-contained work, Sterling’s story is something of a disappointment. But, as a total package, this book is worth picking up.

More fantastic fiction is indexed by title and author/editor.

One thought on “Pirate Utopia; or, Adventures in Reviewer Parallax”