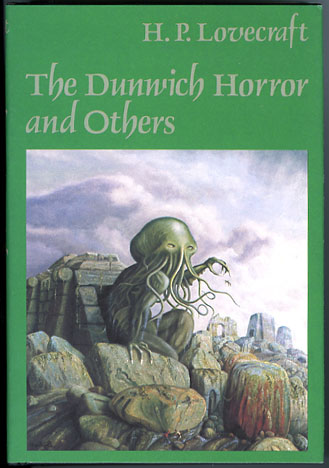 I recall that Lovecraft scholar S. T. Joshi at one point said this was one of Lovecraft’s greatest stories. Upon the second reading, I’m inclined to agree.

It’s not only a horror story, but it also has the feeling of a creepy sf story.  Lovecraft’s Cthulhu stories frequently boosted their verisimilitude with bits of science and history and literature, but Lovecraft is particularly skilled at that here.

He gives us the Outer Ones, an alien race conducting secret mining operations in the Vermont hills (sort of a predecessor to John Keel’s Mothman), and he describes their biology as well as motives. They could conquor the Earth if they wanted but aren’t about to bother unless we give them trouble. (Narrator Wilmarth and Akeley echo what must have been Lovecraft’s disdain for real estate developers when they talk about how the rural hills of Vermont must not be inhabited.) A particularly brilliant move is equating the Outer Ones’ home of Yuggoth (a favorite piece of fabulous geography in Lovecraft’s oeuvre) with Pluto which was discovered in 1930, the very year this story was written.

Lovecraft talks about how Einstein’s contention that faster than light travel is impossible is wrong. Oddly enough, he mentions the Outer Ones as flying through the ether with their wings when, of course, Lovecraft must have been aware that ether was disproved in the famous Michaelson-Morley experiment which laid the groundwork for Einstein’s work.

Lovecraft’s historical erudition is on hand here in brief asides about New England colonial history. His interest in folklore, is mentioned in a role call of modern folklorist. I have no idea if they are all real writers but I did recognize the names of Frazer and Murray (of the now discredited Witch-Cults of Europe). Arthur Machen gets a specific mention has does Charles Fort (thereby answering my question about Fort’s influence on Lovecraft).

There is a veritable roll-call of Cthulhu deities. I recognized some that were made up by other authors of the Lovecraft circle, and I’m sure I missed others that fit in that category.  Occult tomes are mentioned.

Other classic Cthulhu Mythos elements are a narrator, here a folklorist from Miskatonic University, narrating the horror in retrospect though, interestingly, here he is not trying to rationalize away his horrible discoveries even though he lacks any objective proof for them.  (Though no specific mention is made of it, the climax of this story and Lovecraft’s “The Dunwich Horror” — also featuring Miskatonic U professors — both take place in early September 1928. There must have been much to talk about in the faculty lounge though Lovecraft makes no reference to the earlier tale.)

There are humans in league with aliens. There are entities from beyond the our space and our time. Lovecraft’s use of documents is on hand here as he builds the suspense by the device of Wilmarth and Akeley, increasingly threatened by the Outer Ones around his Vermont home, communicating by letter.

It occurred to me that this tale shows the incorrectness of a common criticism of Lovecraft: that the horrible, final revelations of his narrators are hardly shocking or unexpected. I think those critics miss the point. The particular revelation at the end of this story — the fake hands and face used by the Outer One imposter of Akeley — may be unexpected, but the revelation that Akeley has been silenced (specifically he’s a disembodied brain ready to be taken in a traveling cylinder to Yuggoth) by the Outer Ones is not. I suspect that Lovecraft wanted the central horror of some of his best stories to not be contained in the final revelation as much as the depiction of a rationale, learned person (as his scholar heroes almost always are) being forced to confront a new, horrible paradigm. It is the mental violence of the old, tranquil, explainable being replaced by the inimical, uncaring, and alien that is the horror, not the particular image which Lovecraft uses to finish his process of painting encroaching mental chaos.Â

On a third reading in 2013, I noticed this is the most technological of Lovecraft’s stories.

Besides an examination of the things Lovecraft’s scholar heroes usually look at — carvings and manuscripts — protagonist Wilmarth also looks at kodak pictures and listens to a wax cylinder. Then, of course, there are the cylinders the Mi-Go put brains in — the most elaborately described technology of any of Lovecraft’s aliens.

It’s also, being written in 1930 and thus a later work, one of the more, along with Lovecraft’s At the Mountains of Madness and “The Shadow Out of Time”, extensive elaborations of the Mythos and makes reference to not only some of Lovecraft’s earlier stories but Mythos additions from Frank Belknap Long and Clark Ashton Smith.

However, reading this again, the strain Lovecraft had in writing this story — Joshi says in his Lovecraft biography that Lovecraft worked on this story over several months and even took it with him on trips (something he almost never did) — shows in some of the padding of this story.

Wilmarth’s naivete is extended a bit too long. Even the Mythos additions and the clever transformation/confirmation of Yuggoth into the newly discovered Pluto, has a bit of the sense of “kitchen sink” padding about it.

I liked how much of the opening was a sort of dueling skepticism. Akeley says that, if only knew what Wilmarth did, he wouldn’t believe the Mi-Go stories either. There is a bit of a contradiction in the end when Wilmarth wishes he would have connected up the Akeley cylinder to learn more and confirm what he suspects is true — but he’s already got that confirmation — which he doesn’t want to accept in the mask and gloves (though, of course, less information). There is, of course, a tacit assumption that the claims the Akeley imposter makes about the nature of the Mi-Go, even their very existence as well as their technology, is true, and they want Wilmarth to voluntarily go with them. Of course, the cylinder is sort of a confirmation of their story.

More reviews of Lovecraft are indexed on the Lovecraft page.

9 thoughts on ““The Whisperer in Darkness””