World War One in Fantastic Fiction: “The Bowmen”, Arthur Machen, 1914.

The war was not yet two months old Arthur Machen when published his story. As the story alludes to, trenches were already being dug though, of course, they were not the extensive trenchworks that later in 1914 extended from Switzerland to the English Channel.

However other, later realities of the war, the ones that became iconic and symbolic shorthand in later stories of the fantastic, do not show up: muddy trenches, assaults into a leaden storm of machine gun bullets or the steel storm of an artillery barrage, or fields clotted with barbed wire.

Machen’s story, like so many he did involving the war, looks back to the Middle Ages.

Of course, no fantastic story of the Great War achieved the fame, albeit disguised as the “truth” of the Angel of Mons, that “The Bowmen” did.

But there are other things that set Machen’s story apart.

It’s set at what first seems, to a reader now, a particular time and place: August 23, 1914 near Mons, Belgium. That association, though, relies more on Machen’s story becoming the Angel of the Mons legend than the specifics of the story.

It uses a neutral, journalistic voice.

And it contains several details that specifically deal with the war.

I don’t know when, between August 30, 1914, when the first news reached the citizens of England of the battle, and September 29, 1914, when the story was published, Machen wrote his story. Nor do I know what newspapers he consulted for the specifics of his tale.

It was during the Retreat of the Eighty Thousand, and the authority of the Censorship is sufficient excuse for not being more explicit.

That opening line contradicts the usual assumption that this story is set at the Battle of Mons.

The Retreat, sometimes called the Great Retreat, in the books I’ve consulted takes place after the Battle of Mons which, depending on the historian, extends into the early hours of August 24th. The Retreat ended on September 2nd with the British Expeditionary Force marching almost 200 miles according to Michael Hanlon’s “The War of Movement, Part 1” in the August 2014 issue of Over the Top.

I’m not sure where Machen got his figures as to the number of men on the retreat. The BEF sent 100,000 troops to the front in August 1914. I’ve seen a figure of 70,000 BEF troops actually at Mons given by Hanlon.

“The Censorship” Machen refers to what was not as tight as it would later be, but it was still there. The UK’s Defence of the Realm Act allowed it, and that was passed August 8, 1914. On September 1, 1914, revisions were made to the act. Regulation 21 was changed to

No person shall by word of mouth or in writing spread reports likely to cause disaffection or alarm among any of His Majesty’s forces or among the civilian population.

Correspondents were not allowed to accompany the BEF into battle.

Gwilym Games, in his essay, “‘Making Up a Story in My Head’: Machen’s Legend of the War”, notes that “that The Evening News editorial line was to condemn the excesses of the government-backed censorship”.

Machen’s mentions of a salient is certainly relevant to the Battle of the Mons where a salient went from northwest of the town and to the north as shown on this map. 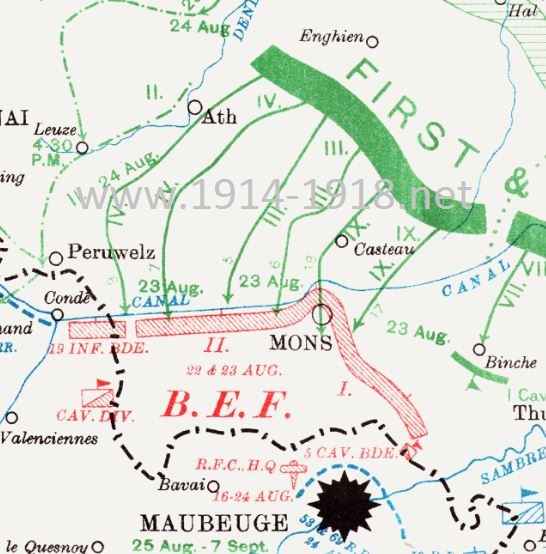 Again, though, that’s before the “Retreat” he mentions. The BEF advanced to Mons. It was after that battle the retreat began.

The brief descriptions of the German shelling broadly match the BEF’s experience at Mons.

However, there were not “three hundred thousand men in arms with all their artillery swelled like a flood against the little English company” at Mons. Jack Horsfall’s and Nigel Cave’s Mons: 1914 puts the German forces at 135,000.

Machen’s story concentrates on unnamed company of a 1,000 men seemingly opposed by 10,000 Germans. Machen’s use of a “company” is confusing. The BEF of 1914 had the battalion has its standard operational unit. There were four companies in a battalion as well as headquarters and transportation staff. On paper, the entire battalion was 1,007 men so, strictly speaking, there would not be as many as 1,000 men in a “little English company”, but Machen, never a soldier, may be using company in the generic, non-military sense.

The mention of the grey of German uniforms is, of course, correct, and the detail of one British soldier firing at a “man in the grey advancing mass – 300 yards away” is quite realistic. There were closer engagements in the battle.

The mention of German officers shooting at their retreating men using revolvers may surprise some. The semiautomatic Mauser and Luger pistols are iconic from the time. However, the Reichsrevolver 1879 was still in use in the German Army of 1914, so it’s possible that German officers in the battle carried it. It’s also possible Machen simply wasn’t interested in getting such details right and, when it came to officer’s sidearms, revolvers are what immediately came to his mind. I have not come across any actual accounts of German officers shooting retreating soldiers.

Machen had a deep interest in stories of German atrocities in Belgium and some mentioned German corporals shooting civilians with revolvers, so that may be another reason why he uses “revolvers”.

The firing of the British soldiers with “no hope” but “aimed as if they had been shooting at Bisley” is a reference to the Bisley shooting range in Surrey. Built in 1890, it still serves as a site for shooting competitions.

The story’s conclusion of “ten thousand dead German soldiers” again somewhat confuses the exact time and location of the battle.

The story ends with

In Germany, a country ruled by scientific principles, the Great General Staff decided that the contemptible English must have employed shells containing an unknown gas of a poisonous nature, as no wounds were discernible on the bodies of the dead German soldiers.

Technically, lethal gas had not been introduced to the war yet though the French had used ineffectual teargas in August 1914. Poison gas is generally thought to have been introduced on April 22, 1915 at the Second Battle of Ypres.

Interestingly, that line is from the 1915 reprinting of Machen’s story. The original version says

In Germany, a country ruled by scientific principles, the Great General Staff decided that the contemptible English must have employed turpinite shells, as no wounds were discernible on the bodies of the dead German soldiers.

“Turpinite” is key to Machen himself believing an early rumor of the war. Turpinite, according to A. D. Harvey’s Collision of Empires: Britain in Three World Wars 1793-1945, was an explosive claimed to have been invented by the French chemist Eugene Turpin. It probably was just “a more efficient nitrate-based explosive”, but, starting in 1891, Turpin claimed to have invented something truly new: an explosive that produced instant and painless death to everyone in a 400 yard radius.

The Wikipedia entry on turpinite hints that Germans attributed deaths by concussion, which left no obvious marks on a body, and the smell peculiar to the explosive in French and German artillery shells, to the rumored gas.

Machen’s bowmen evidently kill with a spectral weapon that leaves no trace. However, there is a curious oblique echo to the use of something approaching arrows in the war. On September 21, 1914, the London Daily News and Leader mention the dropping of flechettes on a group of encamped German soldiers. It was estimated that the 50 flechettes, five inches long and about three-eights of an inch in diameter, killed or injured 13 soldiers.

I don’t know if Machen had already written “The Bowmen”, published eight days later, by the time of the article or even saw it. I suspect the arrows came entirely from his medieval-tinged imagination and not accounts of ineffective aerial bombardment.

Machen also mentioned, when the story was reprinted in The Bowmen and Other Legends of the War, an ending he contemplated but thought too over the top:

“All-Highest,” the general was to say, “It is true, it is impossible to deny it. The men were killed by arrows; the shafts were found in their bodies by the burying parties.

You will also note, in the second edition of the story, the phrase “contemptible English”. I’m fairly confident it arising from a order supposedly issued by the Kaiser to destroy “Sir John French’s contemptible little army”. All members of the BEF who served in France and Flanders and who fell under artillery from August 5, 1914 through November 22, 1914 called themselves “the Old Contemptibles”.

There is one further thing to note in the phrase “Germany, a country ruled by scientific principles”. It hints at what Games calls Machen’s “disenchantment with the modern world” even before the war. He thought it too materialistic, too trusting of scientific world. Germany wasn’t just a military foe. It represented the epitome of that materialism and scientism.