The Michael Moorcock series continues not with sword-and-sorcery but science fiction. 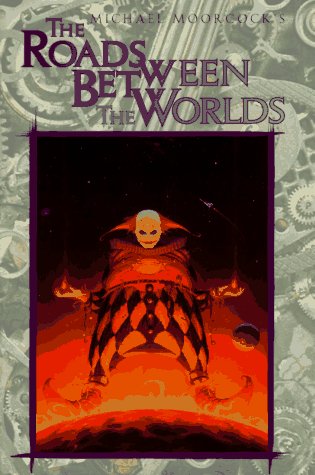 “Introduction” — An interesting introduction in which Moorcock not only talks about the three novels in this omnibus but his relation to sf. Moorcock cites Alfred Bester’s The Stars My Destination and The Demolished Man as an influence which made me eager to read the novels in this omnibus. Moorcock has said he doesn’t have a lot of interest in “modern sf” but liked the works of Fritz Leiber, Philip K. Dick, and the Frederick Pohl and C. M. Kornbluth collaborations. This explains his dislike of Larry Niven and Robert Heinlein. He doesn’t like conservative sf with its preeminence of rationalizing with hard science its fantasy elements. For him, sf (he’s hardly alone in this nor is it an illegitimate stance) is a way to understand our world. The fantasy element in his sf is both a symbol as well as a device to move the story. He says these three novels trace the evolution of the “rationalist apparatus” of sf from “stage machinery” to symbolic writings. Moorcock also, as I didn’t know, worked as a writer for the British Liberal Party for awhile. These novels were written in one draft and very slightly revised for this edition. Evidently, they were written in a hurry to provide more traditional far for the experimental magazines Science Fiction Adventures and New Worlds.

The Wrecks of Time — I liked this novel a lot more than I thought I would. Its plot of Earths being built and destroyed and altered (and the inhabitants amnesiac about the alteration of their planet’s geography) reminded me of Philip K. Dick’s themes of what is reality and simulating it. The scheming groups of D-Squads and aliens obsessed with recreating the society that birthed them reminded me of A. E. van Vogt (also an influence on Dick).

The Winds of Limbo — I didn’t care for this novel all that much. Part of that may be due to its origins in Moorcock’s attempt to write a version (though the end product, says Moorcock’s introduction, is pretty different) of Disraeli’s Coningsby. The political machinations of the plot didn’t involve me much. I thought the novel’s largest weakness was the character of the Fireclown. His words and actions don’t seem to merit the love and adoration of his followers or their claims to his profundity. Simon von Bek’s hatred of the Fireclown is understandable given that the Fireclown aka Manny Bloom was once his daughter’s lover and that von Bek tried to kill him. Alain’s love of the Fireclown is partially explained by the Fireclown being his father, but Alain von Bek was attracted to him before he found that out. The novel is interesting for the vision it gives of its period of composition – late 60s or early 70s. Tobacco is illegal, but marijuana is regarded as a much better drug. A universal welfare system is in place via a global government. Mayfair, the formerly prosperous London suburb, is now the world’s only slum courtesy of a rich landlord who refuses government intrusion and services and his criminal tenants are too proud to accept welfare. Governance relies on polls. Given that Moorcock claims to have done little revision on this novel, the tobacco bit make this novel kind-of-sort-of prescient. The wild, hysterical acceptance of the anti-rational, anti-technology and, ultimately, anti-intellect Fireclown seems a timely notion for the late 20th century. (Though, at novel’s end, Alain von Bek attributes the wild swings of public attitude toward the Fireclown to sheer boredom.) This novel features Alain von Bek as the hero and manifestation of the Eternal Champion. While he is more obviously so than Dr. Faustaff from The Wrecks of Time, he is certainly less the heroic sort than von Bek of Moorcock’s The War Hound and the World’s Pain, Hawkmoon, or even Elric and Oswald Bastable.

The Shores of Death — I liked this grim tale of dying mankind, incapable of having children, slowly going mad on an Earth that no longer turns, its former moon crashed into the Pacific Ocean. This tale is a science fantasy in the style of some of the romantic pulp tales. Moorcock’s tone is morose, melancholy. The insanities of man dying out were interesting: a religious order dedicated to destroying the artifacts of man and their opponents who embrace the old evils of totalitarianism. Moorcock does a good job showing why people, through a combination of fear, anger, and a sense that desperate times require desperate measures, and aa need for order, would embrace and reluctantly support such an order. Given the constraints of a pulp, dark adventure tale he does a lot with the psychological aspects of a race facing death via sterility. The space ache which renders space travel painful, and the “raiders” that stopped Earth’s rotation are further romantic, implausible touches.  The project to build a giant antenna to let any aliens listening  know that man once existed and of his works was very reminiscent of the alien message in James Gunn’s The Listeners. Clovis Becker seems little like a manifestation of the Eternal Champion, but then none of the heroes of this omnibus seem like Champions given their predilection for political and psychological machinations rather than physical violence and the blatant (even more than Elric) way destiny and circumstances push them around. Still, Becker in name belongs to that cluster of Beggs and von Beks that frequently show up in the Moorcock multiverse. His opposition to the Chaos forces of the Brotherhood and the oppressive Law of Andra’s fascists place him in the service of the Cosmic Balance. Like most of the Eternal Champions, he must put aside personal happiness and the loss of his emotional capacity to serve the Balance which here is simply procreating and keeping humanity alive even if by incest. The unsatisfying bit of the novel is the ultimate nature of brilliant scientist Orlando Sharvis. He may be what he says – simply a scientist who honors requests. It seems more likely, however, that he maliciously grants wishes (like some figure out of a fairy tale) that have some hidden downside. I suspect Moorcock may have intended Sharvis as an allegorical representation of all scientists – usually neutral in matters of ethics but sometimes furthering their own agendas.

2 thoughts on “The Roads Between the Worlds”