The usual story: I’m working on new reviews, so you get old stuff. In this case, that’s more Michael Moorcock. 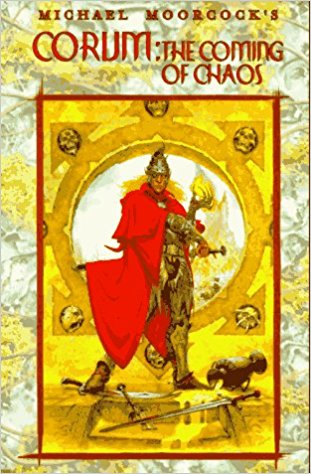 “Introduction” — Moorock notes this is only fantasy whose language and mythology derives from a specific source, specifically Cornish.

The Knight of the Swords — I liked this fantasy more than I thought I would, especially since I found out it was based on Cornish mythology. I found several things surprising, variations on the other fantasies of the Eternal Champion saga. The book wastes no time giving us Corum as a mournful, melancholy figure. In short order, he finds himself virtually the last Vadagh, a complacent, rational, anti-social race that he finds upon venturing out of his castle, almost dead at the hands of the upstart race of man, here called Mabden. He gets maimed, losing an eye and hand, and then falls in love with a Mabden woman. Unlike Elric, he is a rational, dispassionate sort who dismisses sorcery, in this world practiced by the upstart Mabden. His lover Rhalina is much more learned in sorcery. (The ship of corpses, including that of her husband, is one of the most startling images of the book along with the vast, naked form of Arioch, Lord of Chaos, Knight of Swords — the Sword Rulers are Chaos Lords in this series — with men, lice-like, crawling over his body, feeding on crumbs, sweats, and scabs). Unlike Elric, Corum is never allied with the Chaos Lords. He finds out they want the destruction of all the older races on his plane and want to supplant them with Mabden whom they have been aiding. His quest for vengeance against the Mabden man who killed his family broadens to take on the Chaos Lords. Like Elric, Corum possesses an unreliable, murderous weapon in his prosthetic Hand of Kwill (the only remnant of a dead god). Unlike Stormbringer, the Hand doesn’t feed on souls nor does it seem to kill indiscriminately (it seems to kill those suborned by Arioch), but its sudden, uncontrollable violence against those Corum does not wish to kill distresses him, makes him guilt-ridden like Elric. I liked the character of sorcerer Shool-an-Jyvan who wants to overthrow Arioch. Vain, what he wants, in his own words, is to be the first truly omniscient and omnipotent god, to “make the universe concerned” to “change all the conditions” of the universe. He sends Corum on a quest to recover the hidden heart of Arioch to gain power over the god. He doesn’t realize he’s a pawn of Arioch’s, that Arioch has given him his power, can’t get at his heart and wants it taken by Corum so he can roam the Planes at will. Arioch is a Chaos Lord. Chaos leads to injustice, death, but also creation – the older races, under the sway of the Lords of Law were degenerating into stagnation. Chaos is the enemy of truth, and Arioch says that mortals never accept the natural state of the universe is anarchy. At novel’s end, Corum meets Lord Arkyn (who he unknowingly met earlier as the Giant of Laahr), a Lord of Law weakening on the mortal plane, a lover of the dead Vadhagh. At novel’s end, after the death of Shoal, he knows, like most Eternal Champions, his happiness must be put aside for the struggle to restore the Cosmic Balance, here tipped too far towards Chaos. (It usually is tipped toward Chaos in the Eternal Champion perhaps because a world overly dominated by Law is less dramatic.)

The Queen of the Swords — I liked this quest story of Corum entering the Chaotic Fire Planes of Xiombarg, the Queen of Swords. The baroque details of the chaotic landscape and degenerate armies of Chaos were quite stunning and inventive. I also liked Jhary-a-Couel, sort of an Eternal Sidekick to Eternal Champions, and his knowledge (with bouts of amnesia and vagueness) of the multiverse and the struggles between Law and Chaos. I also liked his cat. The fact that neither the gods of Law or Chaos can act directly but only through mortal agents is driven home when Law God Arkyn reveals the manipulations he has put Corum through just to destroy Xiombarg (and, almost incidentally, help Corum). Corum notes he could grow to hate the gods to which Arkyn replies he would understand that attitude.

The King of the Swords — This book is not as compelling a quest and adventure tale as Moorcock’s The Queen of the Swords, but it is still interesting for the most detailed literary and philosophical exploration I’ve seen yet of Moorcock’s multiverse. Erekosë, Elric, and Hawkmoon (though just via a brief bit with the Runestaff) show up. Corum and the first two band together briefly to defeat a sorcerer. Jhary-a-Couel (companion to many Eternal Champions throughout space and time) continues his role in the trilogy as a sometimes vague, sometimes keen, guide to the multiverse and the Eternal Champions’ role in it. Neither Law or Chaos is absolutely good or evil, both are necessary, life is rooted in paradox of all sorts. This novel serves as sort of veiled explication of Moorcock’s narrative devices. Not only is paradox rife in the multiverse – as well as self-similarity of the Mandelbrot sort, but it is remarked at one point that correspondence is rife in the lives of the Eternal Champion thus explaining Moorcock’s ricocheting narrative where the heroes sometimes get caught up in battles and quests that seem to have little to do with their goals and where problems are solved via very unexpected means. It is explained that both gods (the products of men’s dreams yet, in another paradox, gods may have created mortals) must obey the Cosmic Balance. Law acknowledges authority and obligation. Chaos doesn’t but still, in the end, has to obey nevertheless, and, because Law recognizes the need for some Chaos which leads to justice, the Eternal Champion usually serves Law even if sworn to Chaos like Elric. The novel opens strongly with the genuinely horrifying Cloud of Contention which sets friends and lovers against each other with eventually murderous emotions of rage and annoyance. Though Moorcock depicts the effects well, he sort of seems to forget the emotional consequences of this as Corum and company careen through various planes looking for a cure. It sort of reappears at novel’s end, via corpses, as a theme. The Cloud of Contention does lead to a humorous and truthful bit from Jhary when he annoyedly remarks that he is

“tired of the company of gloomy heroes, of those doomed to terrible destinies – not to mention a lack of humor”.

When Kwll kills not only the Gods of Chaos on the Fifteen Planes but also the Gods of Law, it is quite unexpected. (Kwll does not have to obey the Cosmic Balance, and he decides the Conjunction of the Million Spheres is a time for changes.) However, it is in keeping with a theme in the later part of the book that the gods are embodiments of mortals’ desires and fears, that mortals create the gods, sustain them, and can get along without them and their manipulations. Jhary departs at novel’s end, bound for planes where gods still exist. Moorcock seems to good naturedly have his tongue in cheek when Jhary remarks he would hate a world where he must blame himself for his misfortunes:

“Gods – a sense of an omniscience – not far away – demons – destinies which cannot be denied – absolute evil – absolute good – I need it all.”

2 thoughts on “Corum: The Coming of Chaos”