Long before I read David Hambling’s excellent Cthulhu Mythos fiction, I knew him as a popular science writer on weird or speculative science for Fortean Times and on military technology. I read his earlier Weapons Grade: The Revealing History of the Link Between Modern Warfare and Our High Tech World which I recommend as a look at civilian spinoffs – some social like the public relations industry – from military research and weapons. (I did not review it though.)

Before I read Arthur Holland Michel’s Eyes in the Sky, I decided to actually read this one which I got last year though it is several years old. 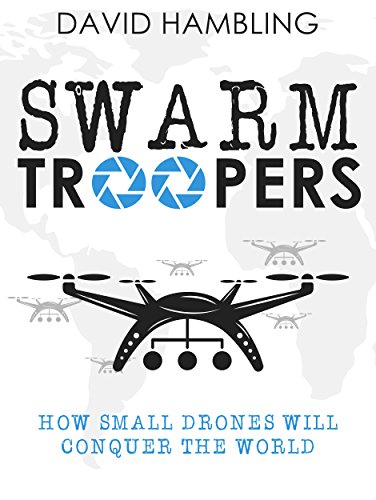 To paraphrase a prophet,

Beat your iPhones into swords, and turn your Christmas toys into spears: let the weak say, I am strong.

This self-published work draws upon David Hambling’s extensive writings about modern drone technology for various magazines. It may be four years old, but it’s still worth reading. The kindle versions has extensive links to various online resources, and Hambling’s blog swarm-troopers.com has kept current with news on the types of drones central to this story. Hambling’s presentation seems to almost be intended as a concisely written academic precis on the subject with an abstract given for each chapter.

I haven’t kept that current with developments in drone technology, so this book was valuable.

The first thing one learns is that militaries have been messing about with unmanned aerial vehicles since 1849 when an attempt was made to bomb Venice with unmanned balloons. The British military developed a remote-controlled airplane in 1916. Drones piloted remotely via onboard tv cameras were successfully deployed by the U.S. Navy in 1943. A Drone Anti-Submarine Helicopter (that would be DASH — this book is full of often strained military acronyms) was developed in the early 1960s.

So why did it take until 1993 for the U.S. military (actually the CIA) to finally deploy, in a reconnaissance mission, the GNAT-750, predecessor to the famous Predator drone?

Here we see a common theme in the story, particularly in the world driver of weapons development, the U.S. military: “white-scarf syndrome”. That, in the aviation wings of the U.S. military, especially the United Stated Air Force, is the manifestation of an old theme: the highly-skilled, elite, single warrior losing his status and his role in combat and trying to prolong the inevitable. Pikemen rendered the mounted knight obsolete. Musket-wielding peasants did the same with the samurai (though, of course, Japan’s peculiar history let them hold on for centuries before the final reckoning).

In America, the cult of the fighter pilot has reached its apotheosis with that ultimate projection of America’s non-nuclear capabilities: the aircraft carrier. It’s also led to its ultimate absurdity: the F-35 fighter. Its unit costs, depending on whom you believe and what model you talk about, are between $85 and $185 million.

There’s another downfall to manned fighter aircraft: the extraordinary costs and lengths modern Western nations will devote to preventing one of those expensive fighter pilots from being killed or captured.

The unit costs of drones are much less in terms of cost and the vulnerability of their directors.

Drone development also reverses the direction of technology’s flow as documented in Hambling’s own Weapons Grade. No longer does development start in the military and seep its way to civilian applications. The smartphone, with its small package of GPS navigation, cameras, and data processing, in particular has aided drone development. The commercial competition of smartphone development has accelerated the power of drones. “A drone is simply a smartphone with wings, and the wings are the cheap part.”

Hambling emphasizes small drones because, at the time of the book’s writing, 90% of the Pentagon’s drones weren’t the famed Reapers and Predators. They were small drones.

Three issues for drones, the possible limitations on their use, are addressed.

The first is the same limitation on battery power that bedevils consumer electronics. But the common lithium ion battery is not the only possible technology, but, putting aside possible alternatives still being researched, there are other options: fuel cells, solar cells (small drones, because of their size, are much better suited to being entirely solar powered), and simply stealing power for a battery recharge from an electric line. There are “biomimetic” options as well. Drones could perch between flights to save fuel. They can use the same aerial maneuvers to save energy that various birds do.

The second problem is who flies the drone and how is it controlled in a long-distance environment often out of sight and with the enemy mounting jamming defenses. The answer is you can program the drone ahead of time and use “artificial intelligence” to help it carry out its missions and self-modify its instructions as well as seek out targets for death, destruction, or surveillance.

So how much mayhem can a small drone carry out? More than you might think. In a chapter that was the most informative and startling to me, Hambling tells us. The big factor is the closeup precision the drone enables. That enables smaller payloads, and there are a bunch of options. The Tec Torch slices through steel using a flashlight sized device and a small fuel cartridge. Thermobarics are enhanced explosives. A four pound charge can take down a building. Small incendiary charges can be carried drones. (The U.S. and Japan, in World War Two, tried just that with, respectively, bats and unmanned balloons.) Tanks can be taken out with relatively small charges if properly directed. And, of course, you can use good old fashioned firearms on a drone including an 12 gauge shotgun weighing less than two pounds. Drones themselves can be used to fly into jet engines. Non-lethal options include “laser dazzlers” to blind people.

Or, for spy purposes, you can tap into radio communications and wi-fi with a drone.

But it’s the “swarm” part of the title that’s truly important. You don’t have to worry about battery power if you continuously fly a swarm of drones, replacing individual drones when a recharge is needed. You can offload piloting and data processing to a flying mosaic of processors. “Quantity”, Joseph Stalin said, “has a quality all its own”. Not every drone has to get through to the enemy airfield or jet fighter or the radar equipment of an aircraft carrier. Mount a swarm of drones whose unit cost is under $10,000 and you can render that F-35 inoperable or engage in “aerial denial” of a piece of real estate. Individual drones can successively attack a target until it’s destroyed.

The defensive response is, of course, a swarm of your own, an option Hambling explores in the book and the related website. That part is still theoretical, but, lest you think Hambling is just engaged in abstract theorizing, the book is full of technical details on the drones in use and prototypes built by the time of the book’s publication.

And don’t think standard techniques of arms control are going to be of any use. Most of drone technology is international and commercial. Anyone can buy it. Iran and its allies in the Middle East have already used, in combat, drones they built. And only one person has to come up with a design and the results can be publicized worldwide and sometimes built – at least in part – by a 3-D printer.

Yes, the weak are about to become stronger. Military tactics and weapons development and production in America will need to be seriously rethought if it is to maintain its military supremacy.

And using drones isn’t just a game for nations. Terrorists can use it. Biological agents and lethal chemicals are lightweight payloads. Terrorists or a nation could offload a drone swarm from a cargo container and make life miserable for the inhabitants of a city. We are in the same position civilians were doing the First World War. The drone will probably get through.

And it doesn’t take much imagination to see how this tool could be used by governments against dissidents. Government options range from merely physical and electronic surveillance to that and one of those thermobaric payloads delivered to a dissident meeting house. Or you could simply be very ostentatious in your surveillance as a deterrent.

One suspects that writers of science fiction and thrillers have already mined this book for ideas.

But this is, after all mostly a history book now. We’re further along now in this timeline of potential dislocation, suppression, and terror. We now live in the prophet’s “valley of decision”.

Look at the indexes for more books on World War One, espionage history, and general nonfiction.

Grew up in the Dakotas. Went to Macalester College and never left Minnesota after that. Studied English and geology in college. I work in a tax related field that has little to do with either. This is a blog about books, mostly my reviews of them, and some expanded thoughts provoked by my reading. You will find more of my reviews at the links to my Amazon and LibraryThing page. I was also a reviewer at Innsmouth Free Press (Innsmouthfreepress.com), and I've published a bit of poetry. View all posts by marzaat

The Historical Diaries
The Critiquing Chemist