I will be reviewing more of William Hope Hodgson’s short fiction, but I’m now back to the usual posting procedure of taking things in the order I read them.

Ther’s a bit of morbid air about my posts on Hodgson. 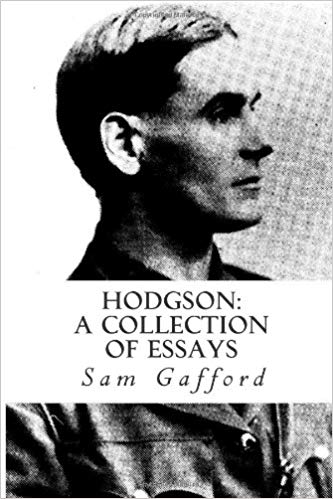 There are two significant essays here that justify the Hodgson fan – or even those just curious about the man and his work – buying this 71 page book: “Writing Backwards: The Novels of William Hope Hodgson” and “Houdini v Hodgson: The Blackburn Challenge” Both were first printed elsewhere in, respectively, Studies in Weird Fiction No. 11 and Weird Fiction Review No. 3.

“Writing Backwards” concludes, by looking at some letters of Hodgson’s, with the following composition dates of Hodgson’s novels: The Night Land (1903?), The House on the Borderland (1904), The Ghost Pirates, (1905), and The Boats of the “Glen Carrig” (1905). This contradicts Gafford’s statement in “Hodgson’s First Story”, another essay in the book, that, by 1904, Hodgson had already written all his novels. Gafford speculates that Hodgson’s novels became less strange and imaginative as Hodgson worked towards a style he thought more commercial.

“Houdini v Hodgson: The Blackburn Challenge” deals with the legendary meeting on October 24, 1902 between Harry Houdini and William Hope Hodgson and documented by several newspapers. Houdini, as was his usual practice, publicized a challenge to the locals that he would pay a £25 reward if he couldn’t escape from “regulation restraints used by the police of Europe and America”. Hodgson offered a counter challenge. He would bring his own restraints to Houdini’s performance and bind the escape artist himself. If no escape was performed, the reward would be paid to a local Blackburn charity. Hodgson hoped his challenge would publicize his flagging gym, and Houdini complacently responded to another local challenge to his ability as an escapologist.

Hodgson came with his own restraints and bound Houdini tightly and complexly using his knowledge of human anatomy. Usually, Houdini was free in 15 minutes. This night, though, he was still bound after 35 minutes. Houdini asked for the iron chains and cuffs to be released for a minute since his arms were going numb and were bloodless. Hodgson refused. It was a contest, “not a love match”, he said.

Eventually, after two hours, Houdini got loose. His escape scraped skin off his arms, and he was bloodied. Indeed, he carried the scars the rest of his life. He always hated coming back to Blackburn since it reminded him of “that terrible Hodgson night”.

There were mutual recriminations by Hodgson and Houdini of cheating. Houdini, of course, had a long career ahead of him though he was more cautious about his challenges after that. Hodgson lost his ploy to save his gym. Bad for him but good for us since he then embarked on his career as a full-time author.

“Meet Mrs. Hodgson” looks at Betty “Bessie” Gertrude Farnsworth, born in 1877 and only a day before her husband. She and Hodgson knew each other in school. Hodgson and Farnsworth met again in London in 1912 and married in 1913. She worked as an editor at Women’s Weekly. Hodgson, in a letter to his sister, said Bessie was “not at all good-looking” but an accompanying photograph doesn’t support that. The Hodgsons moved to France a month after marrying and then returned when World War One broke out. Bessie lived with Hodgson’s family in Borth while he was in the army. She kept Hodgson’s reputation alive until she died in 1943.

“MATANGO!” looks at the sole film adaptation of a William Hope Hodgson work, in this case “The Voice in the Night”. Gafford claims the movie was almost banned in Japan because the mushroom people were said to be reminiscent of survivors of the atom bombings in Nagasaki and Hiroshima.

“WHH in WWI” briefly looks at Hodgson’s military career and the details of his death at a Forward Observation Post on April 19, 1918 as the British Army retreated from the German spring offensive.

“The Non-Fiction Hodgson” is a brief account of Hodgson’s non-fiction and speculative essays with brief descriptions of some pieces.

“The Copyright Volumes” looks at the pamphlets from what seems to be a vanity press named R. H. Paget. They were printed in America to secure American copyright for Hodgson’s work Six were done altogether, and Gafford lists the contents.

The rest of the essays have fairly self-evident titles.

“A William Hope Hodgson Chronology” covers his life and also has some dates for his mother, wife, and his sister.

“A WHH Publishing Chronology” is not complete. I’ve found at least one Hodgson story omitted. It does include non-fiction pieces and reprints.

“A Life on the Borderland” is a brief account of Hodgson’s life with comments on some of his most significant works. Gafford cites, for biographical information, R. Alain Everts, Samuel Moskowitz, and Jane Frank.

“Hodgson’s First Story” looks at “The Goddess of Death” published in 1904. By that time, Hodgson had collected 494 rejection slips. Samuel Moskowitz says the motif of the statue may have come from a statue of Flora in the park at Blackburn where Hodgson lived at the time.

We also have “A Brief History of Hodgson Studies”, “A Hodgson Mystery” about the mystery of the dedicatee of Hodgson’s The Ghost Pirates, “On ‘The Baumhoff Explosive‘” aka “Eloi Eloi Lama Sabachtahni”, and “Hodgson’s Serial Characters”.

10 thoughts on “Hodgson: A Collection of Essays”