As usual, old stuff gets dragged out when I’m working on new stuff.

For an emperor so late in the saga of the Roman Empire, Constantine gets a surprising amount of attention and is up there with the early Julio-Claudian emperors in inhabiting, in however misunderstood, inaccurate, and mutated form, a place in the minds of the putatively educated western public. They know he saw a vision of the cross floating in the sky, heard the words “Conquer, in my name”, and went on to win a major battle and converted to Christianity as the result. And Potter’s claim that he is father of the imperial Roman utterance most widely known, the Nicene Creed, is certainly true.

Of course, Constantine is most simply known as the man who officially made the Roman Empire Christian, and, given that he moved the imperial capital to the newly consecrated Constantinople, it’s fitting many histories of Rome end with his death though the western part of the empire limped on for another 137 years and the last vestiges died in the east in 1453.

I’m of two minds about this book. END_OF_DOCUMENT_TOKEN_TO_BE_REPLACED

So what does Stacy Schiff bring to the study of Cleopatra?

A dramatic narrative that opens with a 21 year old Cleopatra smuggling herself, in a rug, to meet Julius Caesar at her old palace in Alexandria. A prose that strives so hard to be elegant that it occasionally trips up, is a bit too discursive at times like going into Florence Nightingale’s impressions of Alexandria, comparing the entrance of Cleopatra into Tarsus with other famous entrances that include Howard Carter into King Tut’s tomb and the Beatles on Ed Sullivan’s show. A tone of rather conventional feminism – history as one long tale of male domination with strong women resented and lied about – rubs against passages where Cleopatra wistfully fears her most beautiful years are behind her, where she resorts to a woman’s first and last weapon of tears. We are sometimes faced with a false choice of seeing Cleopatra as a seducer or a superbly intelligent woman of many talents. Why not both?

Those are all minor quibbles. The Cleopatra of drama and song and painting has so much allure, so much name recognition, that Schiff would have to be a truly pathetic writer to make her into a boring, obscure figure, another one of those figures from the ancient world who is mute on their own life. Instead, Schiff’s prose accomplishes what a good historical narrative should – propels you forward through a story whose end you already know. END_OF_DOCUMENT_TOKEN_TO_BE_REPLACED

Next up — mostly because they’re the quickest way to get some material out there, three retro reviews. 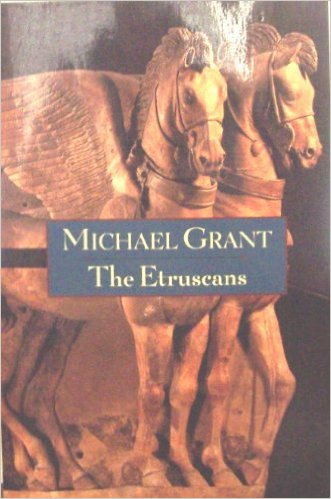 In his brief introduction to the 1997 edition of this book, Grant noted that nothing truly major had changed in our understanding of the Etruscans between then and the book’s original 1980 appearance. Taking a quick and very layman look at the Wikipedia and other sources on the Internet, that still seems to be true – with the exception of genetic studies that seem to support Herodotus’ contention of an Asia Minor origin for the Etruscans.

However, the whole question of Etruscan origins seems to annoy professional Etruscanologists. Etruscans became Etruscans in Italy regardless of where the people migrated from they argue. Besides, Grant points out the linguistic, logistical, and cultural evidence arguing against accepting Herodotus’ claim of a migration from Lydia forced by famine.

The problem with studying the Etruscans is we have to rely on Roman and Greek sources. Besides badmouthing their morals – particularly the freedom women were allowed, fat Etruscan men, and creating stories of them as perpetual enemies of Rome, they also distorted our view of Etruscan politics and culture. There never was, argues Grant, an Etruscan League in any sense but a group that held periodic religious festivals. Instead, Grant organizes his book around the idea of Etruscan city states. These city states had satellite cities and sometimes warred with each other. They differed in their economic basis – though the wealth of most Etruscan cities was based on iron, copper, and tin which drew trade with Greek cities and the Carthaginians. Their burial customs varied as did the output of their artisans. END_OF_DOCUMENT_TOKEN_TO_BE_REPLACED

I’m still catching up on reviews for stuff already read, so you get this retro review from July 5, 2010.

Barry Baldwin did review this for Fortean Times. It was a mixed review as I recall.

Whether you’re a fan of Barry Baldwin’s “Classical Corner” column in the Fortean Times, a fan of the tv series Rome, or already a Roman history buff but can’t remember if it was in Cassius Dio or the Historia Augusta where an 11 year old Commodus ordered a slave to be burned for too cold of bath water, this is the book for you.

From the clever octopus that stole garum out of a warehouse to graffiti in Pompeian brothels to the paucity of praenomina in the latter republic to the sadisms and mere eccentricities of emperors, this is an always lively and amusing book. Each curiosity is never more than a page long, often a single paragraph. McKeown has constructed the whole thing so that you can dip in anywhere though, occasionally, there is a reference to something you would have come across if you would have read the book the traditional cover-to-cover way. Most of the bits are taken from classical works, but he sometimes goes off on modern tangents like comparing the multi-tasking of Caesar to President James Garfield, noting the inaccuracies of Fascist Italian cinema in recreating the Punic Wars, and the horror of French novelist Stendahl at British tourists. And, channeling Pliny the Elder, he notes that he’s left it up to his classical sources to verify the truth of their tales.

The specific topics McKeown covers are Roman family life, women, names, education, military, naval matters, the law, farming, medicine, religion, philosophy, attitudes toward foreigners, slaves, animal tales, spectacles, decadence, food and drink, architecture, sex, timekeeping, and rulers. Throw in a helpful glossary about famous sources, people, concepts, and places and several illustrations – especially of coins, and this is a keeper for anyone interested in Roman history no matter where they are in their studies.

In this collection of ancient historians writing in Greek and Latin, Grant selects all the historians anyone who casually exposed to Ancient Greek or Roman history would be likely to have heard of: Livy, Thucydides, Plutarch, Polybius, Herodotus, Caesar, Xenophon, Suetonius, Tacitus, and Josephus (translations of his Greek writing). To those he adds a more obscure roster: Hecataeus, Hellanicus, Nepos, Diodorus Siculus, Sallust, Dionysius of Halicarnassus, Velleius Paterculus, Appian, Arrian, Dio Cassius, Eusebius, and Ammianus Marcellinus. Luke of the Gospels is also thrown in for his historical material.

There are three main purposes behind this collection.

First, Grant simply wants you to read these historians who are so important as primary source on the classical world, see where some of the famous anecodotes so often repeated in cable documentaries actually come from, get a sense of the character of their writing. Second, Grant gives some basic information about each historian – when they lived, the works they wrote and which ones survived to our time, the extant of their personal involvement in what they write about, the merits and defects of their histories, and a bit on their political and literary influences on the modern world. Finally, by arranging the book in chronological order of the historians’ lives, and not by language or order of their subjects, Grant develops an argument about how the art of history developed in the classical world and which writers were regarded as particularly admirable.

Besides his own translation work (primarily on Tacitus and Suetonius), Grant has selected many other translators and all are fully credited if the reader wants to follow up and get their entire translation of a work.

Grant’s introduction and timeline puts the selections in a rough context for events in the ancient world. The book is extensively footnoted, and Grant often gives, in the titles to individual selections, the date of the event described.

As to the span of time covered here, we have the migration of the Etruscans from Lydia and the founding of Thebes to the death of Emperor Valens at the Battle of Adrianople.

Years ago, I was in the British Museum and saw scraps of the famed Vindolanda writings — actual ink on wood documents from the Roman Empire.

So, of course, I had to buy a book on them at the gift shop and read it shortly before going to England again.

This book will tell you some interesting things about the social life of Roman army officers and their families, the manufacturing and building activities the men of the Roman auxiliaries did when not fighting, the process of Romanizing conquered provinces, and the networks of trade that sprung up to supply the Roman army in Britian. All this comes from some remarkably preserved bits of wood almost 2,000 years old.

But this isn’t a friendly, popular archaeology book. Its bibliography and notes and organization clearly indicate an intended audience of scholars. The text seems to be organized as if nobody will read the book cover to cover. Specific conclusions and facts are repeated from chapter to chapter. I suspect it was thought that its intended academic audience would simply read whatever chapter was titled in line with their speciality.

Still, those who have seen the Vindolanda writings on tv or at the British Museum may be curious to see full translations of many fragments, and students of Roman military administration or Roman Britain will certainly want to take a look. The book also includes several photos of the actual fragments and explains why the script doesn’t seem to much resemble what we think of as Roman writing. Indeed, one of Bowman’s major emphasis is what the Vindolanda fragments tell us about the evolution of Roman writing from Old Roman Script to New Roman Script.

More reviews of books related to Roman history are at the Rome page.

Review: The Annals of Rome, Tacitus, translated by Michael Grant, 1984.

Anyone who has even casually read about Roman imperial history will have encountered Tacitus. He is, according to translator and noted classicist Michael Grant, virtually the only Latin historian we have for the early days of the Roman Empire. This work, generally considered Tacitus’ greatest, covers the period from shortly before Augustus’ death to AD 69, about three years before Nero’s death. Unfortunately, we don’t have the entire work. (The Annals only survived into the Middle Ages through two manuscripts, one for each half of the work.) The section on Caligula is totally missing, and we only have parts of Tiberius’ and Claudius’ reigns. END_OF_DOCUMENT_TOKEN_TO_BE_REPLACED

The Historical Diaries
The Critiquing Chemist