I’ve longed liked Gary Lachman’s articles in the Fortean Times. I’m also an admirer of his work, under the name Gary Valentine, with the rock band Blondie, particularly his song “X Offender”.

So, it was only a matter of time before I decided to read one of his books.

Review: Turn Off Your Mind: The Mystic Sixties and the Dark Side of the Age of Aquarius, Gary Lachman, 2001.

Lachman’s basic thesis is that several elements of the mystic 1960s led not just to the Summer of Love but the murders of Charles Manson and that the strains of thought that produced both go back to the late 1890s.

It’s an interesting story, but most parts of it were familiar to me already, and I’m not going to talk much about them. I am also not sympathetic to mysticism, the Summer of Love, or the spirit of the 1960s.

What I am going to talk about is the surprising amount of material in the book about writers and works of fantastic fiction and how they were connected to the mystic Sixties.

Louis Pauwels and Jacques Bergier’s not only wrote the very popular The Morning of the Magicians, but Bergier also wrote a letter praising H. P. Lovecraft that appeared in the March 1936 issue of Weird Tales. The Morning of the Magicians, published in 1960, had Fortean material and centered on mysticism, transcendence, mutation and the evolution of consciousness. It was a heady mix that drew from the zeitgeist.

END_OF_DOCUMENT_TOKEN_TO_BE_REPLACED

This is something of an oddity and not the type of book I’ve reviewed before.

It’s mostly a how-to book for would-be science fiction writers but also includes some interesting perspectives on the art by its contributors. Of course, a lot of the professional advice is outdated since the book is 41 years old now.

With Jerry Pournelle’s passing, I’m posting it now since he was a contributor, and I’ll be interrupting the Lovecraft series to post some more Pournelle material from the archives.

As usual, I’m still working on getting new reviews out.

“Foreword”, Reginald Bretnor — It is billed as advice from experienced writing veterans.

“SF:  The Challenge to the Writer”, Reginald Bretnor — Nuts and bolts on some basics needed to practice sf craft including some knowledge of science, more intimate knowledge of sf and mainstream literature. Bretnor urges mastering basic story elements like characterization and dialogue. He recommends books to read and compiling own reference library as well as knowing how to use well a public reference library (and to know its staff).  He advises how to avoid errors by avoiding explicit details when possible and thoroughly check facts.

“Star-flights and Fantasies: Sagas Still to Come”, Poul Anderson — Like most essays in this book seem to be (at cursory glance), this is interesting as criticism as well as how-to advice. Anderson’s definition of a saga is larger than life story of a non-introspective character who wants to do something. In addition, a saga must have the right feel as far as language goes. Anderson names some of his candidates for sf epics (L. Ron Hubbard’s Final Blackout, Jack Williamson’s Darker Than You Think and The Humanoids, A. E. van Vogt’s Slan and The Weapon Makers and World of A; Henry Kuttner and C. L. Moore’s Fury) and why he classifies things as he does is revealing. Anderson also (and I agree) says the saga is only one of many legitimate fictional modes. He also makes the valid point that sf (and maybe fantasy) is the last refuge of the outward turning hero. Other hallmarks of epic sf are (according to Anderson) bold language, a hero bending fate (or refusing to be bent). Anderson also gives interesting details on how study of Olaf Stapledon helped him in writing Tau Zero. END_OF_DOCUMENT_TOKEN_TO_BE_REPLACED

A while back I did a Jack Williamson series and I found a few more related reviews in the archive, so I’m taking a brief detour from the H. P. Lovecraft series.

And I am working on some new material. 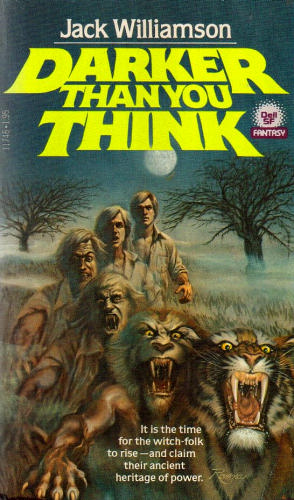 I originally read this novel because Fortean Miriam de Ford listed it as one of the sf works influenced by Charles Fort.  I see no evidence of that.

Fort is not mentioned or even obliquely alluded to.

I think, amongst other things, Williamson was clearly influenced by the work of Rhine on psychic powers, and the notion that these strange powers (which are mentioned in, partially, Fort’s Wild Talents) may be studied scientifically almost certainly comes from there.

If there is any Charles Fort influence, it may be by way of Eric Frank Russell’s Sinister Barrier.

Both novels were published in John Campbell’s Unknown magazine, Russell’s in 1939, Williamson in 1940.

Both novels feature a broad battle between humans and non-humans, Russell’s Vitons and Williamson’s witch-people, with the evidence of those battles showing up in human psychology and odd events. END_OF_DOCUMENT_TOKEN_TO_BE_REPLACED

I’ve thought of it from time to time since then and fondly.

It also seems, in its way, comparable to Edward Whittemore’s Quin’s Shanghai Circus which I’ll be reviewing shortly. That’s why you get this retro review now.

If you are under 40, like conspiracy theories, and don’t recognize two or more of the following names, you will probably want to read this book:

Arnott, in a narrative arranged thematically around the Tarot deck, gives us a secret history that ranges through most of the 20th Century and up to 2011 and back and forth in time from the death of a former MI5 employee and a transvestite hooker in 1987 to a cabal of 1941 science fiction writers in Los Angeles. Here many a character real and imagined have parts, but mostly it’s the story of the fictitious science fiction writer Larry Zagorski and the real Nazi Rudolph Hess. The supporting characters are more ideas and events than people: Hess’ flight to England, the Cuban Revolution, Scientology, black magic, saucer cults, monster movies, utopia and the moment – like a collapsing quantum wave function – the promise becomes disillusionment. And, through it all, is the unrequited love of Larry for a woman.

Part of me suspects that this sort of novel is written starting with a list of historical events and people and then a plot thought up for connecting all the characters and events. But that’s ok. The whole aesthetic of a good conspiracy theory comes from how the dots are linked and how many you work with. END_OF_DOCUMENT_TOKEN_TO_BE_REPLACED

At Book Cover Nouveau, you e-book authors can find some ready made artwork for your covers.

At least that’s the advertising pitch.

I suggest it could be used as a revival of an old pulp magazine tradition: writing a story to match a cover.  Robert Silverberg used to do that. In his pre-Scientology days, L. Ron Hubbard used to be a fast enough writer where editors would send a messenger over to Hubbard with a cover and wait while he banged out a matching story.

They are some handsome covers.